Inflatable or solid paddle board? 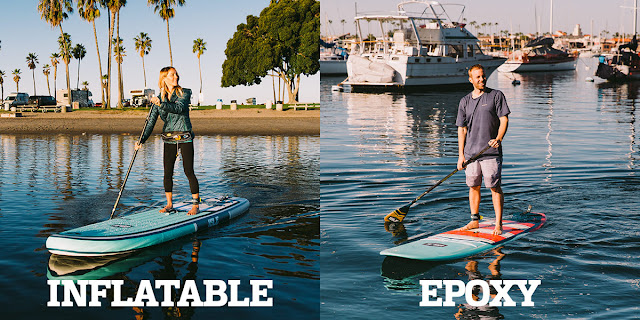 There's often a discussion if one should pick am inflatable or solid board. Yeah, it's sometimes a problem, but on the other hand - inflatable sup sometimes is the only option as the storage space is limited.

That's one the biggest selling point for inflatable stand up paddle boards. You can easily pack them and store away in a closet. Perfect if you have a small living space. It also makes transporting easier. If you have a small car that could become a nightmare.

As they are inflatable then there's always a chance to get a puncture. It's bad, but most inflatable SUPs are made of really high-grade PVC which makes them quite resistant to such things. But that doesn't mean that they are indestructible. Unless you'll abuse your board really hard on sharp edges and other sharp obstacles your board will serve you for a long time.

Sort of similar problem stands true for solid boards too, you can chip them against objects and damage beyond repair. So it's still true for both board types.

Sure you can get cheaper inflatable sup but due note that it may be of lower quality then you'd hope for. So my advice would be to go for the best one you can afford to avoid problems in the future with the board.

Another thing that separates inflatable sups from solid ones is their build specifics and how they perform. Solid boards will, of course, be super stiff and you'll have no problems with steering. But on the other hand inflatable stand up paddle board will have some flex and will not perform quite like a solid board.

But for a beginner that will not be so noticeable. Plus at the beginning, there will be falls which are inevitable. So sort of softer surface will make you feel a little bit better. That especially is true for children or for a bit older people.

Also inflatable stand up paddle boards are usually thicker than solid boards. But some may see it as a plus as you'll be able to keep your feet from getting wet. So imagine a sight where you cross the river in your suite and shoes :) Ok, a joke but it's still possible.

But if you're more interested in performance and you want the board to respond perfectly then a solid board would be more preferred.

But ultimately the choice is yours.